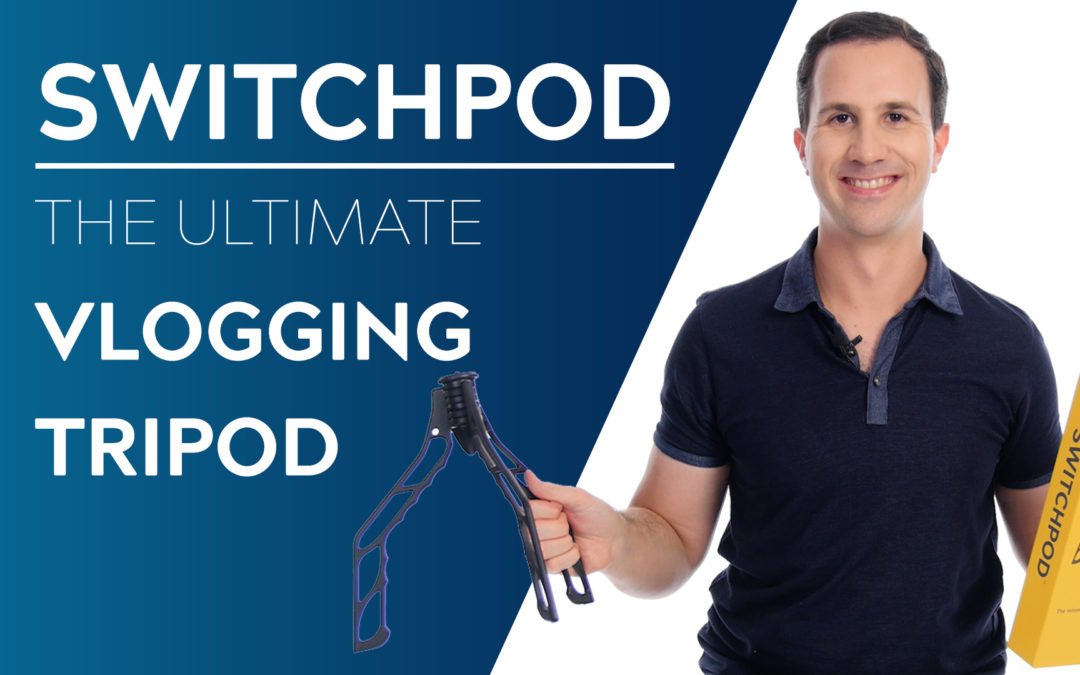 TRANSCRIPTION
Hey, guys, in today’s video, I’m gonna be showing you a very cool piece of gear called the SwitchPod.

So the idea behind the SwitchPod is ingeniously simple. It’s designed to replace pieces of gear such as the famous and prolific GorillaPod, which is obviously the bendy tripod that you can put in all kinds of different positions. But this one’s been designed specifically for vloggers. So in one configuration, it’s shaped perfectly designed to hold the camera out in front of you in a vlogging style hand grip.

But in just a split second, you can flick the legs open. And now all of a sudden, it’s also a tabletop tripod which is really, really cool. And these legs are made of solid aluminium, they are super strong and they also have some 1/4-20 mounting points on either side on two of the legs as well so that you can add a magic arm with a little light, such as an Apurture M9, or some kind of little microphone as well. So it really gives you a lot of flexibility. So the other cool thing about this is you can basically slip it into a backpack really easily. It’s very slimline, you can run a carabiner through any of these legs to just hang it off the back of the backpack if you need to. So it’s a really well thought out design. We’re gonna chuck our 1DX on here in just a moment and you’ll be able to see that it has absolutely no issues taking a camera of that size and weight.

So, we’ve got our 1DX here today, which is quite a hefty camera, and we’ve got a beefy lens on here as well, so this is the 24-70 F2.8, and if you just screw the base of the camera onto the SwitchPod like this, it’s got really easy to use thumb screw, which is really rock solid, and there you have it, it’s basically ready to go, it’s in a vlogging configuration straightaway, and this is really, really comfortable to hold, even with such a heavy camera on the back. And you can of course flick the legs out, put it down on the table, and you’re ready to vlog, so that is really cool. The other cool thing that you can do is if you have a small ball head, you can attach a ball head in between the SwitchPod and the camera so that you can adjust your shot as you need it.

The one downside that I think this has is of course because it’s made of metal, it’s not exactly quiet. But if just basically get used to pausing while flipping that out, you’ll be able to cut that out and post very, very easily. Alright, so it’s all well and good for me to be talking about this in a studio environment like this, but you never really know how good a piece of gear is until you test it out in the field, so let’s head out and see what this is like to vlog with in a real life, run and gun situation.

Okay so we are out of the studio now, we’re out in the field and I have added my camera onto the top of the SwitchPod, and I’ve also added into the mix a little ball head as well so I can have complete control over the angle of my shot. So I’m going to grab a seat. Flick those legs open, and I’m down on the table. And in a matter of moments, I’ve gone from walk and talk vlogging to tabletop vlogging, and it was really smooth, it was really quick, now I don’t need to worry about holding the camera out in front of me, I don’t need to worry about keeping a stable shot, and if I need to, say I want to adjust my shot, because I’ve got a ball head involved, I can just undo the ball head, adjust the angle of my shot, and boom, I’m back to vlogging.

So this is a really great tool, I’m actually super impressed by how easy this is to use, how versatile it is, and how quick it makes the vlogging process. So I’m definitely going to be using this in these run and gun-style vlogs in the future. Alright, let’s head back into the studio for the rest of the video.

This is a really cool little set up, this is going to be available as part of a new vlogging kit that we’re putting together at Gold Coast Camera Hire, so keep an eye out on the website for this, the SwitchPod, and a few other pieces of vlogging kit that we’ll be adding very, very soon. So thank you so much for watching, guys. I hope you enjoyed this video, and of course, if you did, hit like and hit subscribe so that you see more videos just like this one. And also, leave us a comment with what piece of gear would you like us to review next, what would you like to see us have available for hire so that you can take it out on your next shoot, let us know in the comments below, and we’ll be sure to look into that for you. Thanks again, guys, and we’ll see you next time.

What our clients say: